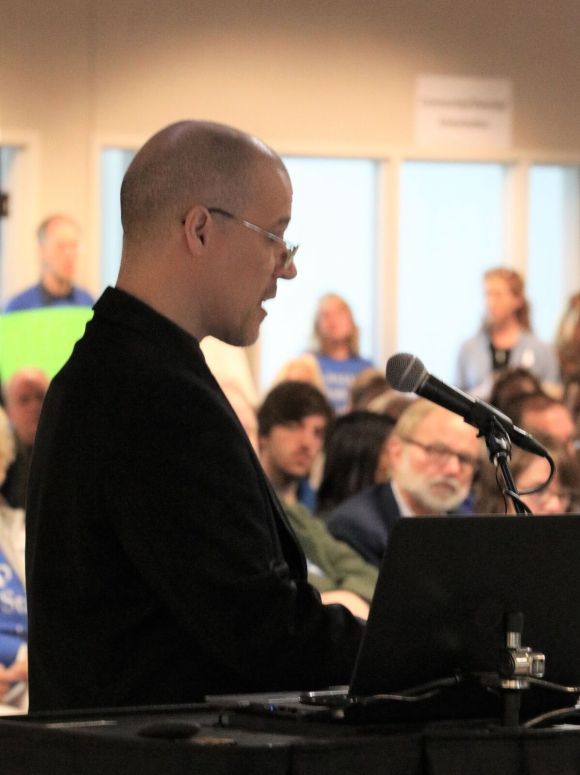 The Faculty Senate is relatively inactive in the summer.  Most Faculty are on nine-month contracts and are not necessarily involved with University business during the summer term.  Instead, most pursue practice of their professional disciplines.  Thus, the tradition at the start of recent academic years has been for the Faculty Senate to report only briefly on summer Senate activity and instead use this opportunity to comment on the state of the Faculty.  Right now, there is a lot to say.

You may recall that the primary theme of my 2017 October address was Guarded Optimism.  At that time, President Schrader’s administration had just begun.  In retrospect, and with one major exception, that Guarded Optimism appears to have been justified.  Your chosen administration led us through a year in which spending was cut by over $53 million.  Units were held accountable to their budgets. We ended the year with a $10 million dollar operating surplus, well above the Board’s goal net operating surplus set to avoid fiscal watch.  You have overseen a significant change in our short-term fiscal situation over the past year.

Impressively, this financial challenge has generally been managed in ways that have not significantly diminished our ability to educate students.  Our programs and students continue to be highly regarded by our accreditation bodies, community, and the employers of our students.  However, our capacity is stressed.  Accrediting agencies have already noted budget and staffing issues as areas to watch in future visits.

In my October address last year, I voiced Faculty concern over a perceived lack of effort to engage in good faith negotiation on the CBA and Faculty concern over the impact of not quickly addressing that uncertainty.  That impact has now arrived.  ODHE reports that 15-day headcount enrollment at public 4-year institutions is down a state-wide average of 1%.  OHDE reports that WSU’s 15-day headcount enrollment is down 9.8%.  WSU is the state leader in public university enrollment loss this year.

This is NOT due to a reduction in quality of the University’s academic offerings.  A large portion of this loss is no doubt due to public perception of our stability.  Given that this is a critical time of the year for the recruitment of new students, it would be foolish to think that an unresolved CBA, allowing for even the potential of a strike, will not earn us the same ignoble distinction for the 19-20 academic year.

Over the last year we have seen nearly double the number of voluntary tenure-track resignations compared to recent years.  This year is likely to be worse.  We have lost some very, very good people and it will be many years before they are effectively replaced.

The challenge that we deliver today is focused on a concern over a year old.  How are we still in a position where there is a very real possibility of a Faculty Strike?  The Faculty Senate is generally very careful to focus on curricular matters and, as much as is possible, expects AAUP-WSU to address matters pertaining to terms and conditions of employment.  However, there are times that those domains overlap, and remaining silent now on the implications of a Faculty Strike to the institution’s very character, and its ability to deliver a high-quality curriculum would be inexcusable.

Today’s message is endorsed by the Faculty Senate Executive Committee representing elected Faculty Leadership from across the institution. We hope that you appreciate the care with which we treat our role as the guardians of the curriculum and that you understand that it is precisely our perception of the gravity of the current situation that makes it imperative that we tell you, publicly, the following:

The next few weeks are a critical time for the University.  Our focus must remain on healing institutional trust, maintaining fiscal discipline, maintaining quality programs, and repairing reputational damage.  It will be difficult, but with that focus, Faculty are confident that our programs will remain healthy.  However, for this to occur, we cannot allow the confidence of potential students and community members to be shaken by unnecessary conflicts over issues that are not urgent and immediate.

The Faculty, as a whole, understand that a legal brief provided in an adversarial legal system might take an extreme point of view for the benefit of tactical negotiation.  But, even accounting for purpose and rhetoric, the vast majority of the Faculty finds most of the positions and tone espoused in the administration’s fact-finder’s brief to be absurd.  The changes to the CBA proposed in the brief (publicly released last week) do NOT address urgent and immediate problems.  On the contrary, in our assessment, most of these proposals will likely create both immediate and long-term institutional damage.

The Faculty Senate speaks for all Faculty, both those in the Bargaining Unit and those not in the Bargaining Unit.  This has included some with extreme points of view and a majority who generally hold moderate positions.  It brings us no pleasure to tell you that, after reading the administration’s fact-finding brief last week, there are very few moderates left.

The position and tone espoused by your legal agent in the released brief will not heal the University.  If we continue on this path, it could severely compromise our ability to deliver a high-quality curriculum.  Any potential long-term good that changes proposed by the administration might possibly one day affect are overwhelmed by both the short and long-term harm of pursuing the current course.

We find it difficult to fathom this breakdown of our years of productive collegiality.  This is not a time to have anyone fear that the University might close its doors, even for a second, over issues which do not have necessary and immediate impact on our mission or safety.  The urgency of the challenges before us is dire.

—challenge us all to work on healing the University now.  This will require good faith negotiations involving short-term compromise by both sides. Postpone the negotiation of any new mechanisms designed to give flexibility in dealing with potential future fiscal crises.  Those discussions should wait for future CBA negotiations.

—challenge you, Trustees, to not lead the University into a situation where the Bargaining Unit Faculty will be forced to strike.

We issue these challenges, after much careful deliberation, to express the urgency to move beyond this plague of uncertainty, so that the University can heal and thrive.